Highlights from the NSW #StopAdani Assembly

The recent #StopAdani Assembly in Sydney brought together people from across NSW. Being there was like recharging a solar battery writes Jen from the Blue Mountain's #StopAdani group.

I travelled down from the Blue Mountains to be inspired and I wasn’t disappointed! We heard from a great range of speakers who shared their proudest moments in the #StopAdani campaign so far. All stories shared a common thread – people coming together.

The dishonourable actions of the federal government surrounding Adani’s quest to build a mega-mine in the Galilee Basin was another key theme. With the NAIF loan out of the picture (insert a ruckus round of applause here), the federal government have set about finding new ways to give Adani’s Carmichael coal mine public money.

The Assembly highlighted that there is no power greater than people power. By building the #StopAdani movement, we become an unstoppable force that will hold our politicians accountable.

We examined the need to turn up the heat on the Coalition. The backdoor deals with Adani were also raised, among them being the Export Finance and Investment Corporation (EFIC). Recent changes to EFIC’s rules appear specifically designed to benefit Adani by allowing EFIC to support onshore resource projects #EFICfail.

EFIC could fund or guarantee a loan for Adani’s mine, railway, or both, and/or Adani’s contractors. Providing financial help to Adani suppliers is another way for the federal government to support Adani’s Carmichael mine and highlights their relentless desire to hand over Australian taxpayers money to fund Adani. The feedback from around the room was unanimous, the abuse of power has to stop.

“Never give up, for that is just the place and time that the tide will turn” – Harriet Beecher Stowe

We discussed the need to connect with our Labor MP’s and push them into committing to #StopAdani once and for all. Conversations can shift the direction of change and the message to our MP’s needs to be loud and clear – No Means No. Not Today, Not Tomorrow – Not Ever.

The need to keep pressure on Queensland Labor was also examined. I was impressed to hear about the progress of the Queensland action groups and how such a diverse group of people can come together to take a stand against injustice.

We were shown photos of the creative ways local Queensland community groups have been delivering the #StopAdani message to their MP’s. So much respect going out to the Queensland action groups! 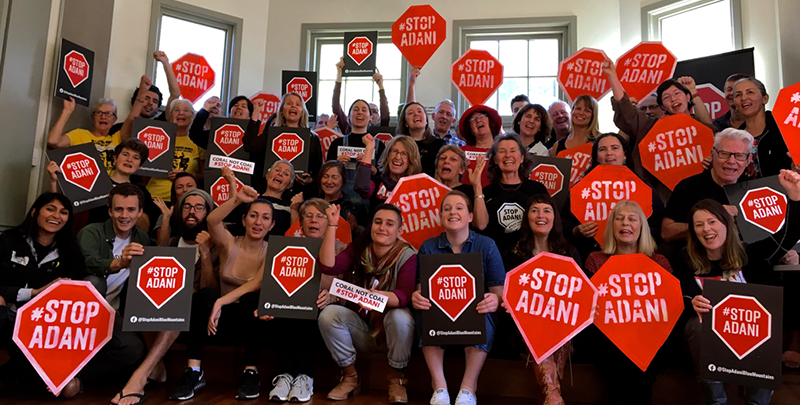 I had the pleasure of meeting so many great people at the #StopAdani Assembly. Thea from Australian Religious Response to Climate Change (ARRCC) was inspiring. ARRCC is a multi-faith network committed to taking action on climate change and is such a wonderful example of solidarity.

I was delighted to hear ARRCC offers free Climate Action Kits to cater for a variety of different faiths. Thanks to Thea and ARRCC I came away from the Assembly with the idea to make the most of the opportunity I have coming up in a few weeks.

I’ll be attending a meditation workshop with the highly respected Tibetan monk, Lama Tendar, considered to be the highest-ranking Tibetan monk living in Australia, he currently lives in Melbourne. I look forward to listening to what Lama Tendar has to say about climate change, especially in relation to Australia.

For me, attending the NSW #StopAdani Assembly was like recharging a solar battery.

Lama Tendar had the honour of being chosen to be the Head Chant Master for The Dalai Lama’s teachings when The Dalai Lama visited the Blue Mountains in 2015. I’ll present Lama Tendar with a copy of ARRCC’s Buddhist Climate Action Kit, an information kit about Adani’s Carmichael mine and of course information on the #StopAdani movement.

I was blown away by the level of awareness and insight shown by two young women representing the Australian Youth Climate Coalition (AYCC); who also attended the #StopAdani Assembly. Georgia and Grace were an absolute breath of fresh air. It’s said being fully present is the best guarantee for a bright future, from what I saw these two young women exemplified Australia’s future at its finest. The diversity of age groups at the Assembly signified the fundamental change and shift in society that is taking place.

Attending the NSW #StopAdani Assembly was like recharging a solar battery. The energy and reflection expressed by the passionate group of people I shared the day with will be stored within and taken back to the Blue Mountains.

What happened after the Assembly

The day after the Assembly, #StopAdani Blue Mountains teamed with GetUp! Macquarie for a day of outreach at Leura Harvest Festival. The Assembly highlighted the importance of having discussions about the #StopAdani campaign. With that in mind, the focus on the day was having conversations that count. I can happily report we lost count of how many good conversations we had! Not just with people from the local community, but also with the many visitors who travelled up to the mountains to share in the celebration. Lots of new sign-ups that day!

In keeping with the Assembly recommendation to connect with Labor, members from Team Bluey had a meeting to discuss Adani with our Federal MP Susan Templeman, Member for Macquarie. The Macquarie electorate spans both the Blue Mountains and the Hawkesbury regions.

Attending the Assembly helped highlight the need the see the bigger picture in relation to our reach within the Macquarie electorate. With that in mind, we’re planning to venture down the mountains to connect with the Hawkesbury region and help activate new #StopAdani actions groups.

Also motivated by the Assembly, Team Bluey decided to double the number of film screenings we had planned! We will now be screening “A Mighty Force” in Katoomba, twice in Springwood and for the first time, we will be holding a screening for the Windsor community. I’m really looking forward to chatting with the people from Windsor and hearing what they have to say.

In an effort to build the movement in the Windsor area, members from Team Bluey will visit local markets to promote the Macquarie electorate #StopAdani postcard campaign. We will hand deliver the signed #StopAdani postcards (complete with comments) to our federal MP, it’ll be great to voice the concerns of people within the Windsor area. The markets will also provide the perfect opportunity to promote the local screening of “A Mighty Force”.

As for me, I’ll be off to “Paint the town #StopAdani”! I’m really looking forward to this…I’m thinking BIG! Be sure to check the local #StopAdani action groups on Facebook to see the imaginative ways different groups have ‘painted’ their town. So much creativity in the #StopAdani movement!

So there you have it, see you at the Beyond Coal & Gas Jamboree!