Last year we moved mountains. Our #StopAdani movement made sure the federal government didn’t hand Adani a billion taxpayer dollars. We're going to do it again.

We made stopping the NAIF loan a key issue in the Queensland election campaign. Tens of thousands of calls, dozens of creative actions, politicians bird-dogged – we put Australians’ opposition to Adani front and centre so Premier Paluszczuk had no other option but to veto the loan.

Stopping the loan was a major victory for people power, taking us one step closer to stopping Adani.

What is the Export and Finance Insurance Corporation (EFIC)?


Our government has contrived a new plan to hand Adani public money through a little known government-controlled agency called the Export and Finance Insurance Corporation, or ‘EFIC’ – or as we call it, NAIF 2.0.

EFIC is Australia’s export credit agency. Its job is to help Australian-based companies operating overseas by providing them with finance when their bank is unable to (so much for the free market, hey!).

EFIC is so devoted to bankrolling dirty coal that it has backed fossil fuel projects to renewables at a ratio of 100:1. Its fossil fuel portfolio includes projects like:

And it’s not just dodgy fossil fuel projects that EFIC has helped! In 2018, EFIC was given $3.8 billion to inject into Australian arms exports. Other EFIC-backed projects include hermit crab adoption schemes, health supplements comprised of sheep placentas and "kangaroo essence" and "hypnotic" makeup claiming to awaken "the goddess within"!

Notoriously secretive, large chunks of what EFIC do is exempt from Freedom of Information legislation, making it difficult to see which projects they are supporting. EFIC has its own board but is ultimately answerable to Trade, Tourism and Investment Minister Steven Ciobo.

Who is Trade, Tourism and Investment Minister Steven Ciobo? 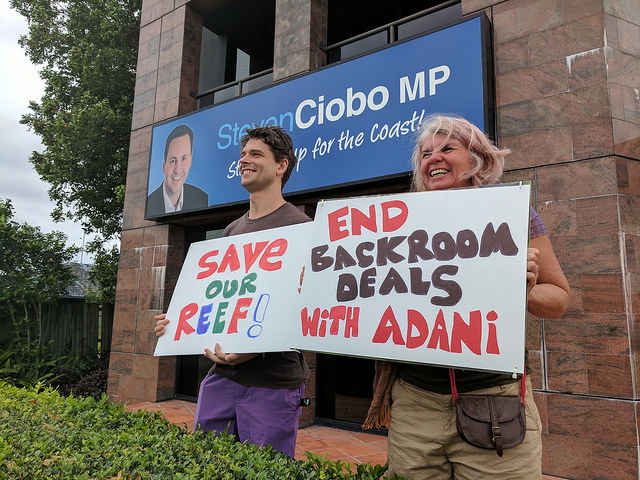 Unfortunately, Mr Ciobo is a good friend of coal, believing it has a rosy future. Last year, after numerous meetings with Adani, including a visit to India, Minister Ciobo changed the agency’s operating rules – now EFIC can now lend to projects like Adani’s. That’s right, he changed the rules to help Adani. Doesn’t sound too EFIC-al hey?!

But Australians everywhere are opposed to taxpayer subsidies for a coal billionaire who wants to build the largest coal mine in the southern hemisphere.

During last November's Queensland election, a ReachTel survey of Queenslanders found that 70% believed Adani should not get taxpayer money, mirroring a national survey the previous month.

And it’s not just the money. We don’t want Adani’s mine full-stop. Nearly two-thirds of Australians (65.1%) oppose the Adani coal mine. If Australians overwhelmingly want to stop Adani and move beyond coal, isn’t it an EFIC fail that our government is still trying to throw our hard earned cash at their dirty coal mine?

The real question is: what are we going to do about it?

To stop our government subsidising Adani, we need to make EFIC the new NAIF. 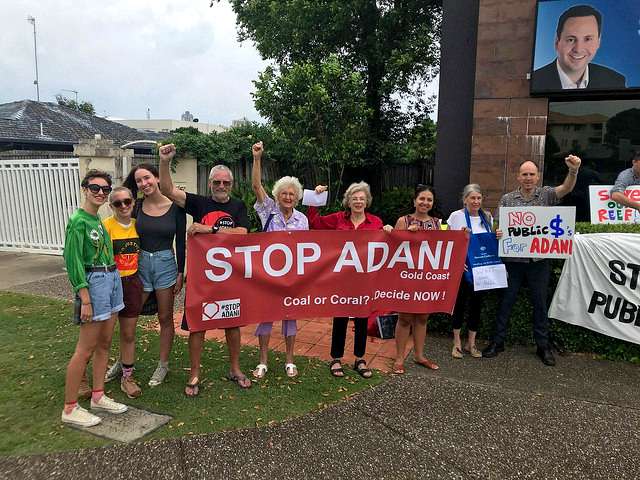 We need to do everything we can to push this issue and our local Liberal/National MPs into the spotlight for their blatant support of coal projects like Adani’s that Australians don’t want.

We do this through organising a steady stream of creative actions in our communities to ramp up the heat on our Liberal/National MPs. Like the NAIF loan was for the Palaszczuk government during her state election, we need to make Adani’s mine a media headache for the government, over and over again.

Think queue-ins at your local LNP MP’s electorate office, or noisy musical rallies outside their office every week. Perhaps you could cycle around your MP offices with “EFIC Fail” bike billboards? Or encircle their offices with a human chain.

There are already exciting plans to up the ante on key government decision-makers in coming weeks:

Head to the No Money for Adani page for more inspiration and then register an action on the Stop Adani map here. Let’s turn up the heat on our government.

IMAGES: #StopAdani Gold Coast deliver letters of concern to Minister Ciobo MP and invites him to come clean about any plans he has to prop up Adani’s coal project using EFIC funds (March 2017).