Lloyd’s of London insurance syndicate Lancashire Group has ruled out underwriting two of the most controversial fossil fuel projects in the world; Adani’s Carmichael coal project in Australia and the Trans Mountain tar sands oil pipeline in Canada.

After hinting at it at its Annual General Meeting, last month, Lancashire further clarified and confirmed to campaigners from climate action group Market Forces that:  "the Group does not have an appetite for underwriting direct insurance exposure for the Adani Carmichael and Transmountain pipeline"

Lancashire Group is the 37th insurance company and the 26th Lloyd’s of London insurance syndicate to refuse to underwrite Adani’s coal project. The #StopAdani campaign is pressuring remaining Lloyd’s of London insurers, such as Hamilton Group, Ark, Markel and non-Lloyd’s specialty insurer Convex to follow Lancashire’s lead and publicly commit not to underwrite Adani Carmichael.

Both Adani Carmichael and Trans Mountains Pipeline projects have been using  insurance broker Marsh Mclennan to line up coverage through the Lloyd’s of London market. With dozens of Lloyd's syndicates now refusing to insure Adani’s coal, campaigners are calling on Marsh and Lloyd's to follow their lead and cut ties with Adani Carmichael for good.

Lancashire’s commitment comes just weeks after submissions to an Australian government inquiry revealed the scale of the insurance industry’s refusal to back risky coal projects. Adani’s largest contractor BMD told the inquiry it was unable to obtain critical insurance cover and is working on the Adani project uninsured.

Market Forces campaigner, Pablo Brait says: “The insurance industry is finally turning its back on Adani’s climate wrecking coal mine. Fossil fuels have no future in a world moving towards net zero emissions.”

“Projects like Adani’s Carmichael mine are risks that insurers are increasingly not willing to take. It's time Marsh McLennan and the Lloyd’s of London insurance market stopped being the laggards which continue to facilitate insurance for polluting projects that no responsible company would support. Lloyd’s needs to follow the lead of its insurance syndicates which recognise that underwriting new coal is indefensible and ban insurance for Adani from its market.”

"With more and more insurers turning their backs on Adani’s climate wrecking coal project, Adani has an obligation to explain to its shareholders and business partners how it will insure the risky Carmichael coal project for the decades it intends to run it.” 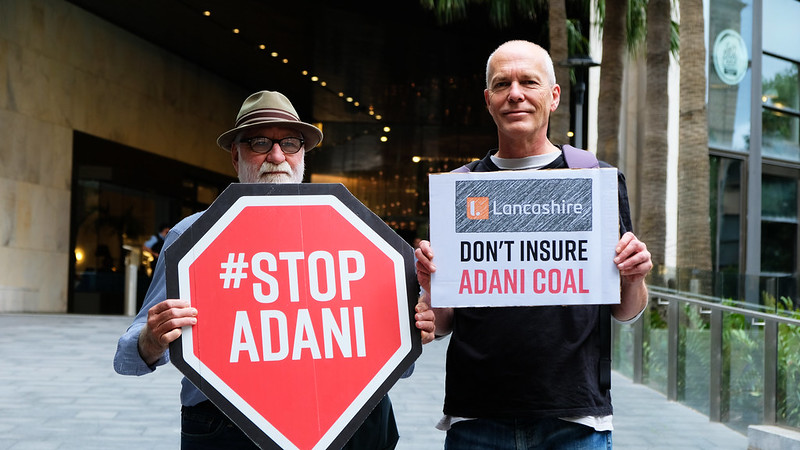