As insurance companies from the UK insurance market Lloyd’s of London rapidly distance themselves from coal and refuse insurance for Adani’s controversial Carmichael mine, the #StopAdani movement is stepping up the pressure on Ark, one of the last remaining Lloyd’s of London insurers yet to rule out insuring Adani’s devastating coal project.

Covid safe rallies at UK consulates took place in Brisbane, Melbourne, Canberra and Sydney. The rallies called on UK insurer Ark to follow the lead of fellow Lloyd’s of London insurers Brit and Hiscox who publicly ruled out support for Adani earlier this month.

Lloyd’s of London insurance companies are under increasing pressure to stop insuring coal as the UK government says climate is a ‘foremost priority’ in the lead up to hosting the COP 26 climate talks. Campaigners are calling on UK insurance companies to put the government’s words into action by refusing to underwrite new coal projects like Adani’s.

Livestream of the Brisbane rally here and the Sydney rally here

While hundreds rallied in person in Australia, hundreds more rallied online in the UK to pressure Lloyd’s of London to be a climate leader and stop insuring coal projects.

Salome Matangi, coordinator with the Pacific Climate Warriors says: “Pacific Island nations are on the frontline of the climate crisis. We are battling sea-level rise, ferocious storms and extreme weather. These impacts are driven by the burning and mining of coal. For us, Adani’s coal mine is personal. Mining and burning coal from Adani’s Carmichael project will diminish the chance we have to protect our homelands and our ways of life from climate impacts. We are in the fight of our lives.”

“Ark needs to stand with the people of the Pacific, and insure our future not Adani’s coal and climate destruction. Ark must stop lagging behind and follow the lead of dozens of insurers by ruling out insurance for Adani’s coal.”

Pablo Brait, campaigner with Market Forces, says: "Insurers all over the world are having their profits smashed by fires, floods and storms made worse by global warming. For Ark and Lloyd's to still be open to insuring a massive new thermal coal mine, which will only fuel more costly extreme weather, is both morally reprehensible and financially irresponsible. Ark needs to avoid undermining the Paris Agreement and join the 32 major insurance companies that have ruled out insuring the Adani Carmichael coal project."

"Every insurance company on Earth should be running a mile from this climate-wrecking mine. The project will help open up a massive new thermal coal basin in the midst of a climate crisis, it is being contested by Traditional Owners who have not given their consent, it is destroying endangered species habitat and draining water supplies. Adani Carmichael is a reputation destroyer for any company associated with it." 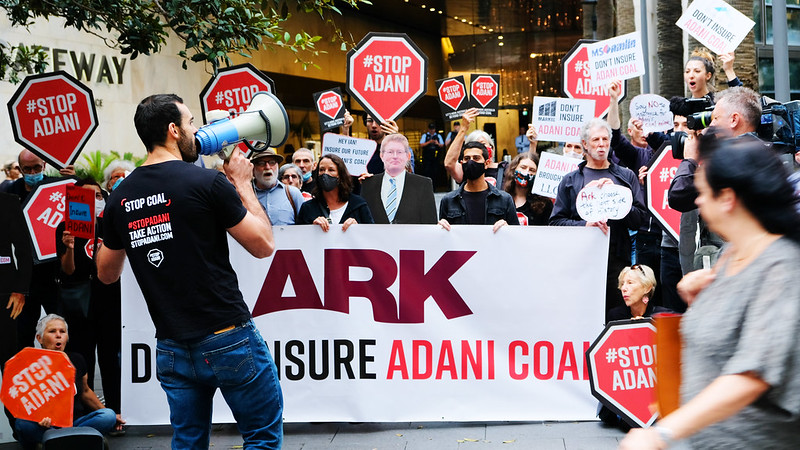