#StopAdani Bondi led a 200 person strong local community effort to make climate change the number one issue in the Wentworth by-election, talking to people at community hotspots across the electorate, knocking on 4,450 doors and having 1,669 conversations during the campaign period.

Simon Fosterling, local surf lifesaver and Stop Adani Bondi spokesperson said, “As a lifesaver with a young family in Wentworth, I am deeply concerned about climate change.

“Our local community knocked on 4,450 doors and had 1,669 conversations with our neighbours. We overcame our nerves, walked in the rain and shared our concerns about the worsening climate crisis and the need for political leadership.

“People really stepped up, making it clear that the Stop Adani campaign is going to be a significant presence in the next Federal election.

“I don’t want my country to be responsible for the mining and burning of coal that is driving climate change, making our coastlines more vulnerable, our cities hotter and extreme weather and droughts more frequent and severe.”

Wentworth resident and local Stop Adani Bondi volunteer, Grace Liley said, “Young people like myself want political leaders who will take immediate action on climate change, not leave it to our generation to deal with later.

“We are fed up with politicians bending over backwards for the fossil fuel industry, supporting dirty coal projects like Adani’s mine and endangering our future.

“Everywhere candidates went we sent them a clear message about what our community wants: Stop Adani, phase out coal mining and transition to 100% renewable energy as the first critical steps in combating climate change.” 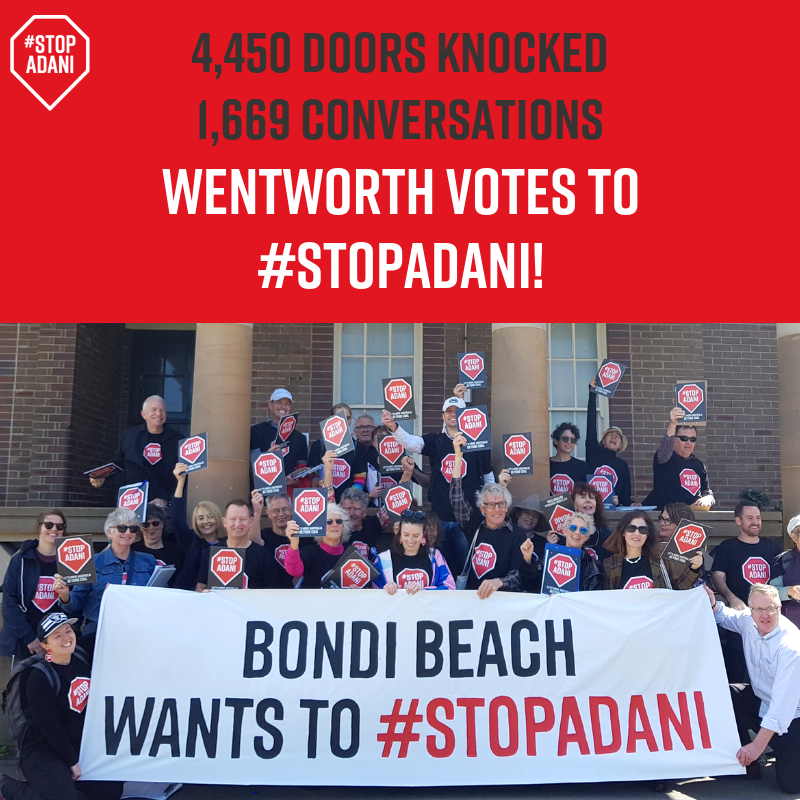