Two months into 2018, it’s hard to get a read on where Labor stands on Adani. Let’s recap.

In late January, Bill Shorten kicked off the year with a speech at the National Press Club that gave the sense he was ready to take a stronger line on Adani. He acknowledged community concerns about Adani and said you can’t have a bet each way on climate change. So far, so good.

Three days later at the launch of Labor’s Batman by-election campaign, noting allegations that Adani had falsified data in a pollution report, Shorten said, "Adani does not deserve a licence to operate a coal mine if they are relying on false statements and false facts." This was stronger still, and we dared to hope Labor was prepared to reconsider their support for Adani. 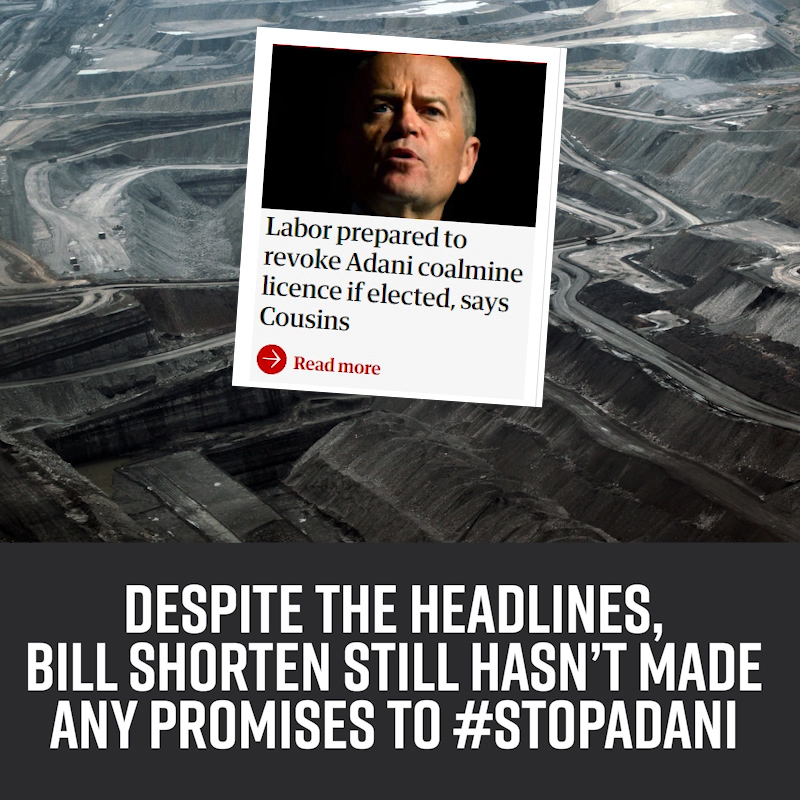 But in the weeks since, Labor party positioning has boiled down to one statement being trotted out by Shorten and any Labor politician asked for comment on Adani:

This doesn’t get us anywhere. It promises no further investigation or potential action by a Labor Government. This line from Labor fails to acknowledge that it is politicians who decide if projects stack up in Australia.  In fact, making those decisions is their job.

This “gotta stack up” line from Labor, means that Labor still supports Adani.

Here’s why. While both sides of politics refuse to come out in opposition to Adani, then Adani know when push comes to shove, they still have the full backing of the Australian government - regardless of who takes power at the next election.

There is nothing stopping Bill Shorten saying he opposes Adani. He could do it today.

The coal industry are howling from the hilltops that if Bill Shorten said he opposes Adani, then this would constitute some sort of ‘sovereign risk’. This is simply not true.

The fact that an environmental approval has been given does not mean it cannot be revoked, as long as there is new evidence to support that revocation - of which there are plenty.

Again, there is nothing stopping Labor saying they oppose Adani. Now Labor needs to be pushed.

Our job is to remind Labor that the overwhelming majority of Australians oppose Adani. Our job is to put Labor under relentless pressure from #StopAdani groups across the nation.

We need to let Labor know they can’t get away with “it’s gotta stack up”.

Labor must choose a side. Will they continue to back Adani and other polluting coal projects or will they join the vast majority of Australians who want to #StopAdani once and for all?