It’s been a huge year in the campaign to Stop Adani! Our movement has successfully held back the climate-wrecking Carmichael mine for another year.

Despite Adani saying they’re getting on with construction, the project still lacks the finance and insurance it needs. All the major banks have refused to provide finance and 62 companies are not working on the project due to the efforts of our people powered movement.

So many powerful stories were told this year about the urgent need to keep coal in the ground and stop Adani’s climate-wrecking, water-guzzling coal project.

Scientists and whistleblowers spoke out about Adani’s environmental impacts. The Wangan and Jagalingou Traditional Owners staunchly resisted even after Adani bankrupted them and the Queensland government extinguished their Native Title. Adani contractors and insurers walked from the project. Hundreds of thousands of Australians rallied in the streets with the student climate strikers demanding the government stop new coal projects and high-level economic analysis warned that Adani could be on the verge of corporate collapse.

Adani coal mine should be suspended, UN says, until all traditional owners support the project - ABC News, January 25 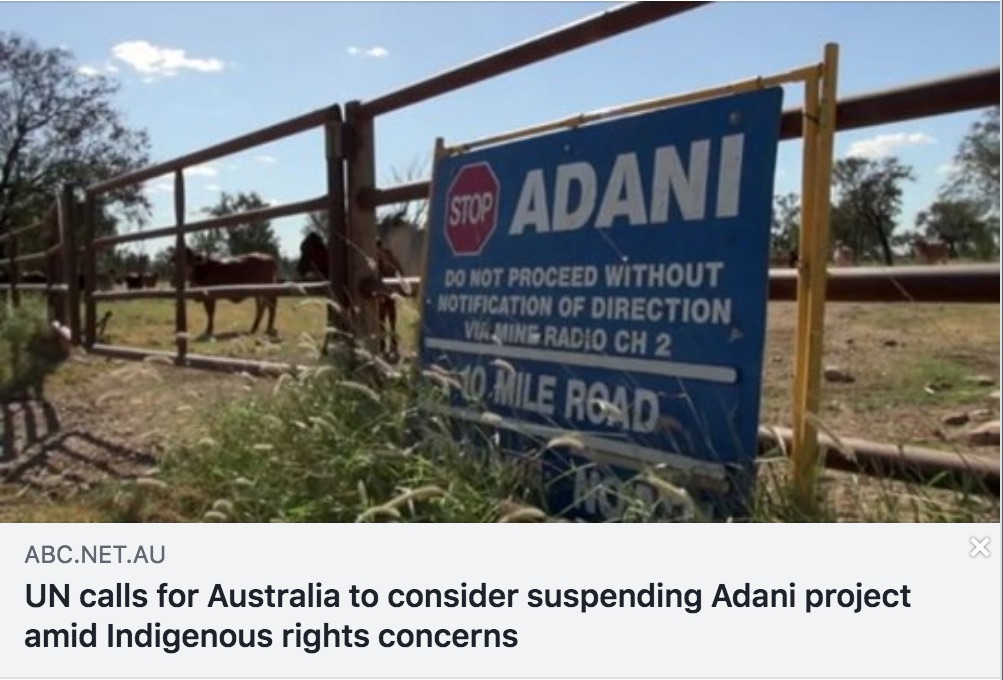 A United Nations committee raised concerns that Adani’s coal mine will violate Indigenous rights under an international convention against racial discrimination. The committee said Adani’s coal project  "does not enjoy free, prior and informed consent of all (W&J) representatives".

Later in August the Queensland government extinguished the Wangan and Jagalingou native title effectively making them trespassers on their own land. Adrian Burragubba told the Guardian, “We will never consent to these decisions and will maintain our defence of country.” 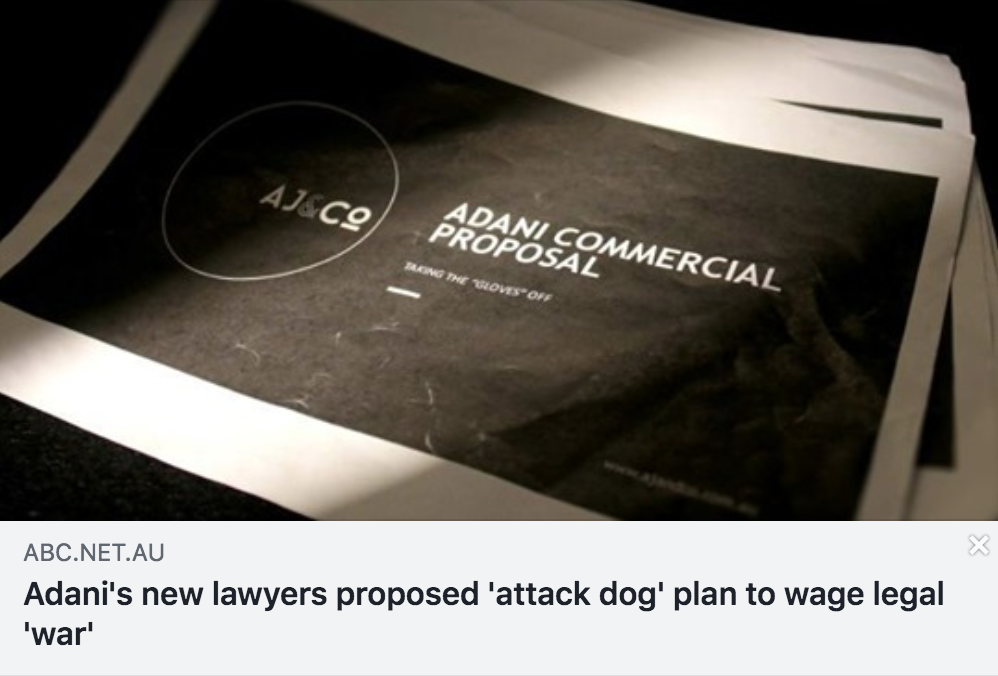 Adani’s ruthless approach to getting their way often involves bullying their opponents with malicious tactics. In February The ABC revealed Adani’s ‘attack dog’ legal strategy that led to one of their lawyers quitting after an internal falling out over strategy. Adani’s blatantly aggressive legal strategy appears to have achieved very little as our movement remains undeterred and committed to stopping the Carmichael mine. 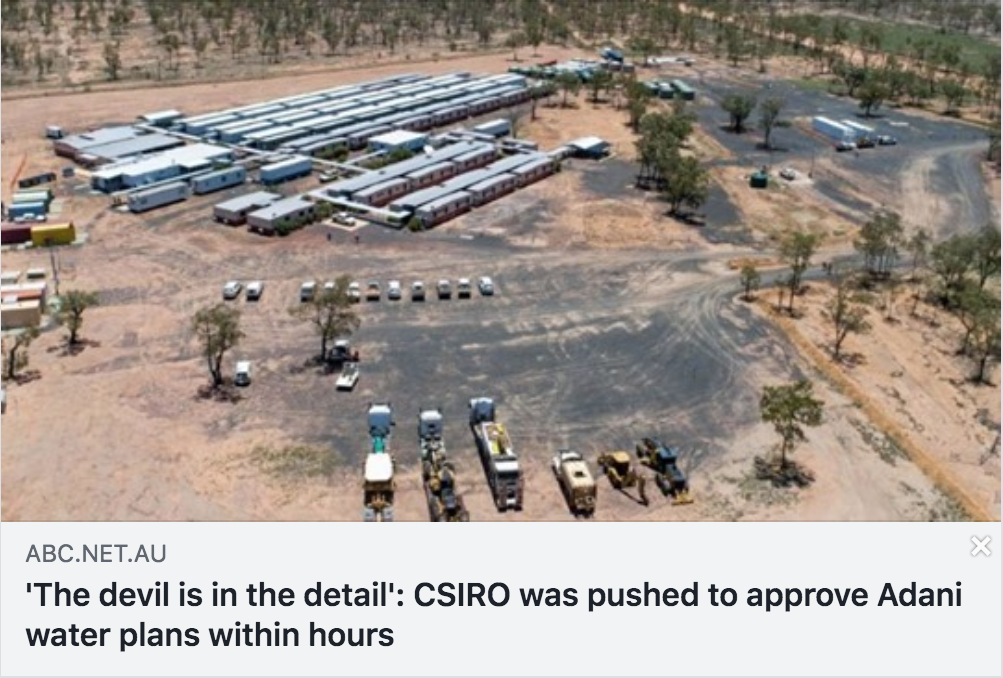 In May ABC news made the explosive revelation that the CSIRO was pushed to formally accept the Federal Government's approval of Adani's water plans in a single afternoon. The Morrison government attempted to deceive Australians by claiming that Adani’s water plans met strict conditions and were ‘confirmed’ by the CSIRO but the agency went out of its way not to provide categorical advice on the water plans and that concerns about the plans had not been met.

The Morrison government was fast-tracking the approval despite extensive criticism of Adani’s water plans from Traditional Owners and scientists. Earlier in May, ABC news reported that Adani’s mine posed alarming risks to sacred wetlands on Wangan and Jagalingou country. In June scientists warned the ancient and sacred Doongmabulla Springs may be destroyed by Adani’s water plans. 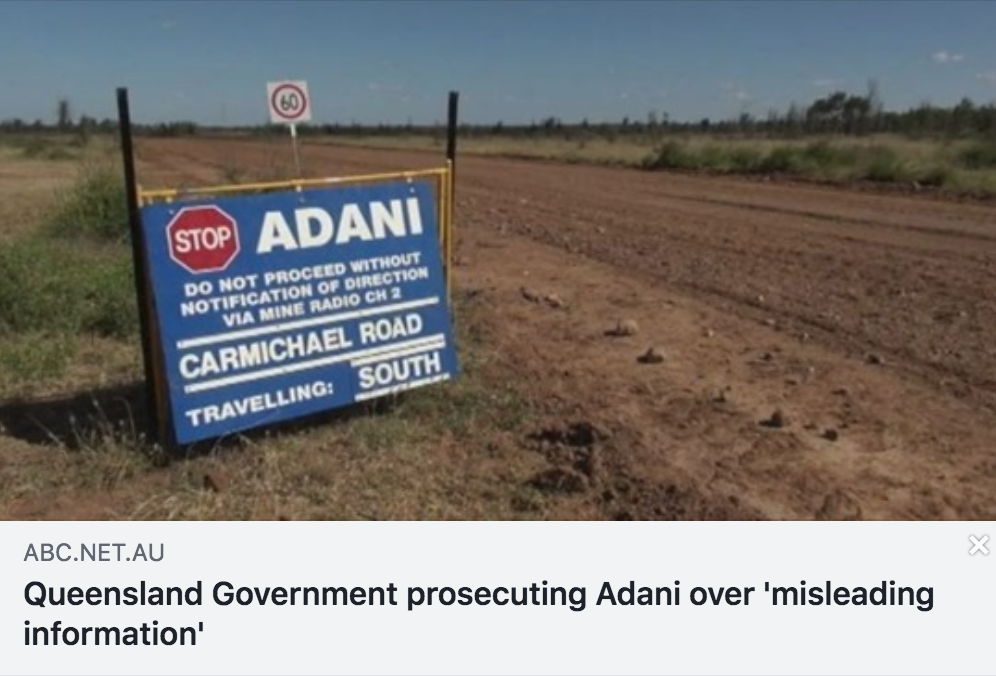 After months of community action, the Queensland government finally announced it was prosecuting Adani for failing to report on unauthorised land clearing on the site of the Carmichael mine. Adani argued it was an administrative paperwork error, campaigners argued that if Adani can’t be trusted to report on unauthorised clearing how can we trust them to look after Queensland’s water. 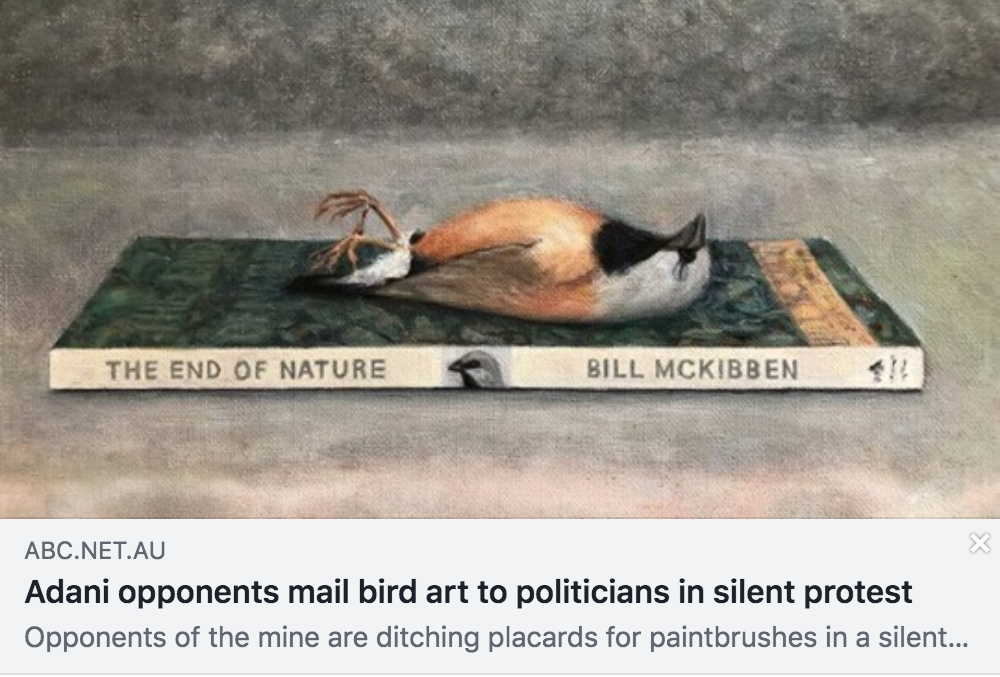 The black-throated Finch has become emblematic of the mass extinction event occurring from environmentally destructive projects like the Carmichael mine and climate change. After the flawed management plan for the bird was released in July artists sent 1400 artworks of the endangered black-throated finch to key politicians to express their grief over the mine's approval. 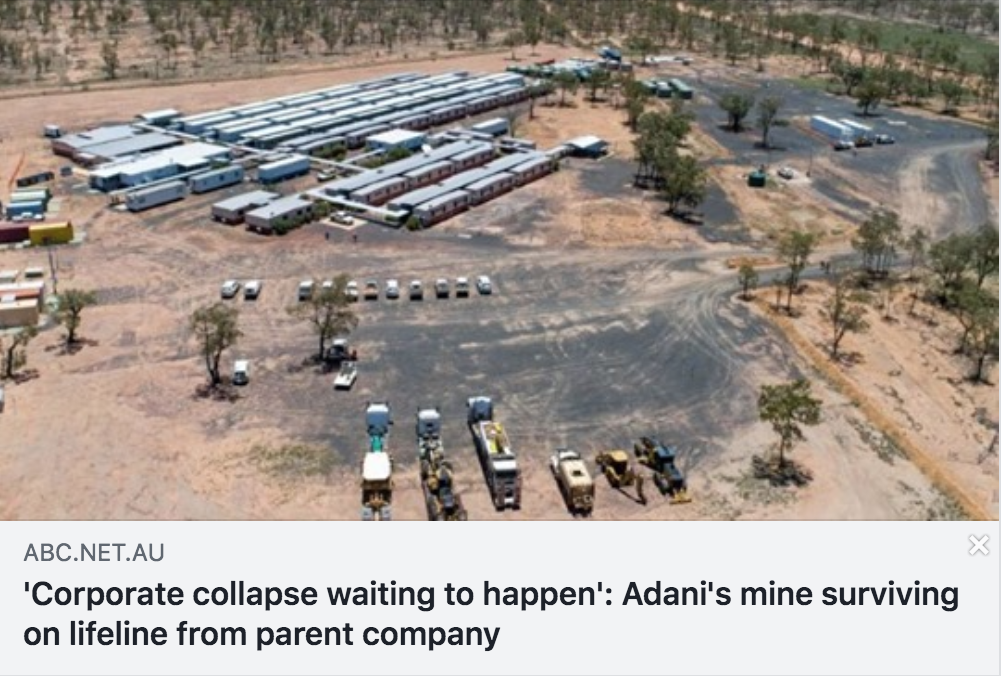 ‘A corporate collapse waiting to happen’ is how Professor van der Laan, a forensic accounting specialist at the University of Sydney, described Adani’s coal project. Adani’s liabilities of more than 1.8 billion massively overshadow their assets of less than $30 million. Van der Laan said on paper Adani are effectively trading while insolvent. 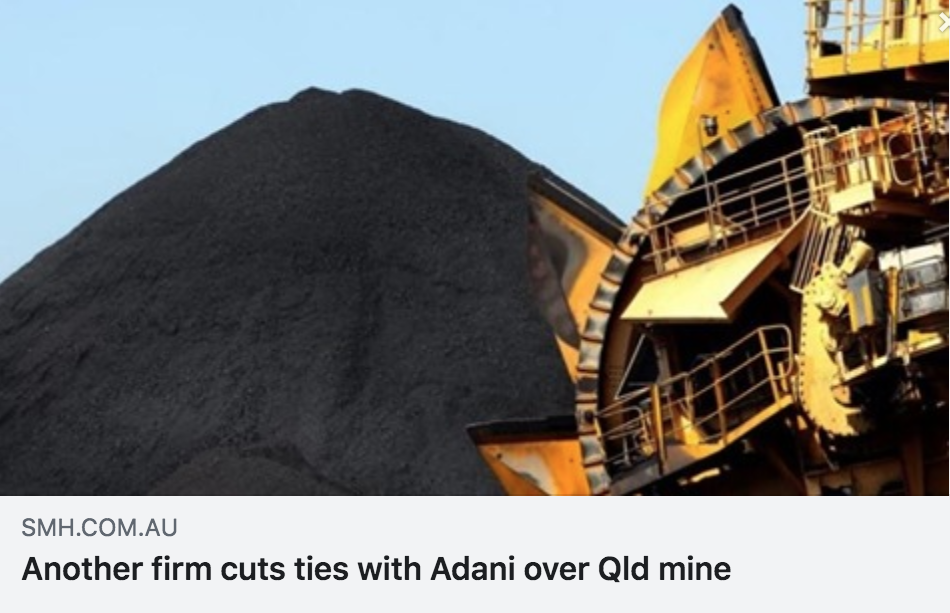 2019 was the year of the contractor campaign. In August the Financial Review reported that the movement was stepping up its tactics on Adani contractors. 2019 saw a string of contractors abandon Adani’s coal project. Aurecon made the right decision for the environment and their business by cutting ties with the entire Adani Group and Matt Canavan threw a tantrum!

In October engineering firm Cardno cut ties with Adani, and Matt Canavan threw another tantrum, then Axis became the 15th major insurer to rule out working on Adani's climate-wrecking coal mine! 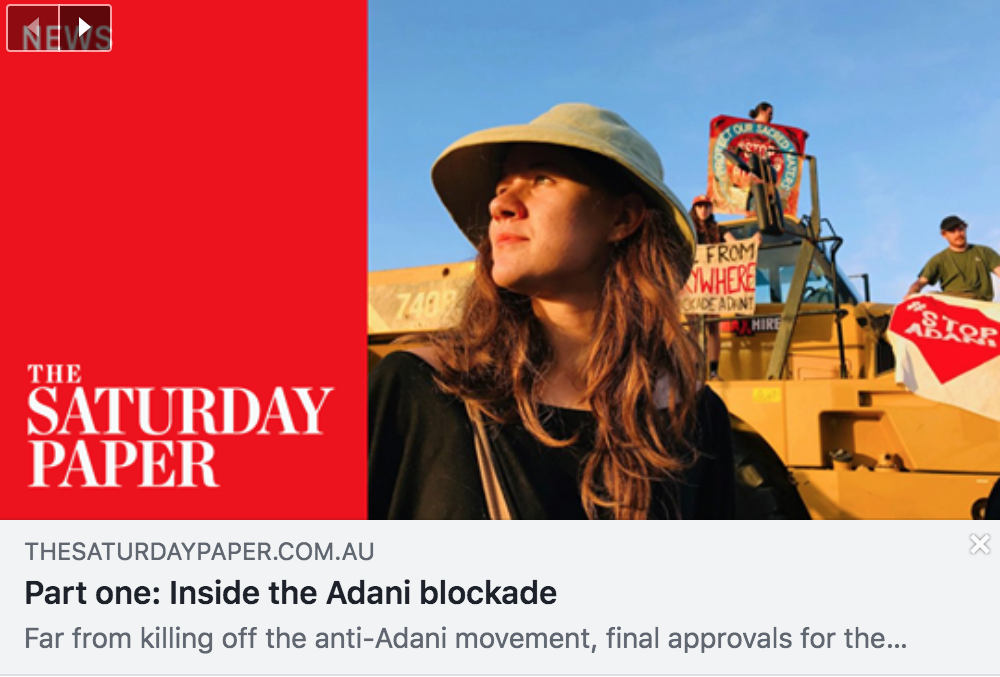 In August freelance writer Anna Krien journeyed to central Queensland and joined the Adani blockade. She wrote this beautiful piece about Camp Binbee and the tenacious campaigners taking brave action on the frontline to stop Adani opening up the Galilee coal basin. 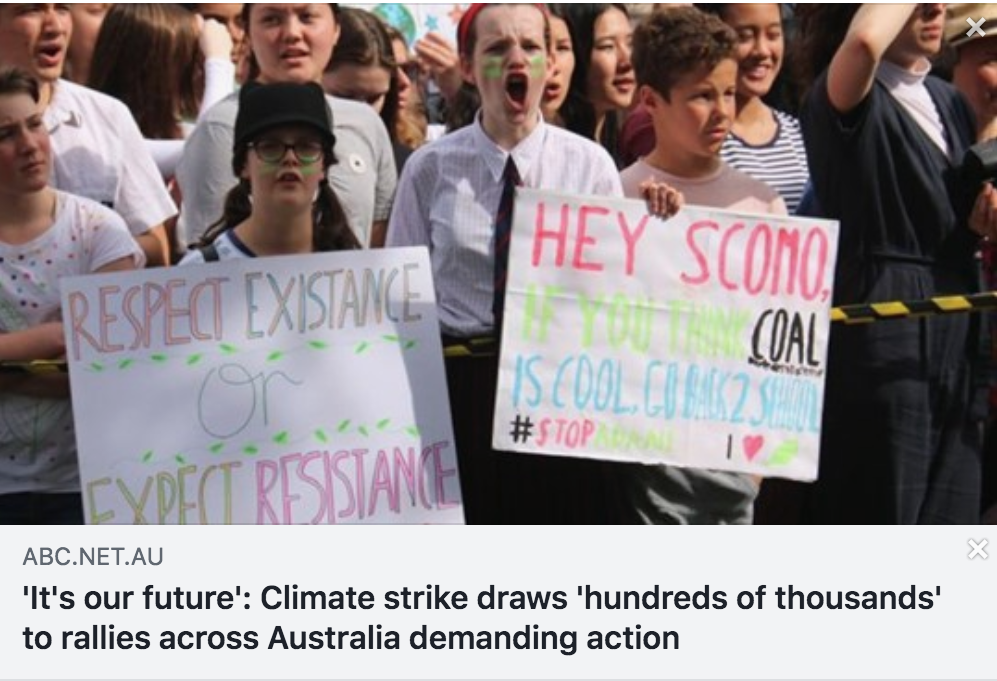 In September school students organised the biggest day of climate action ever in Australia, and the world! Over 350,000 people joined the climate strikes in cities and towns across the country. 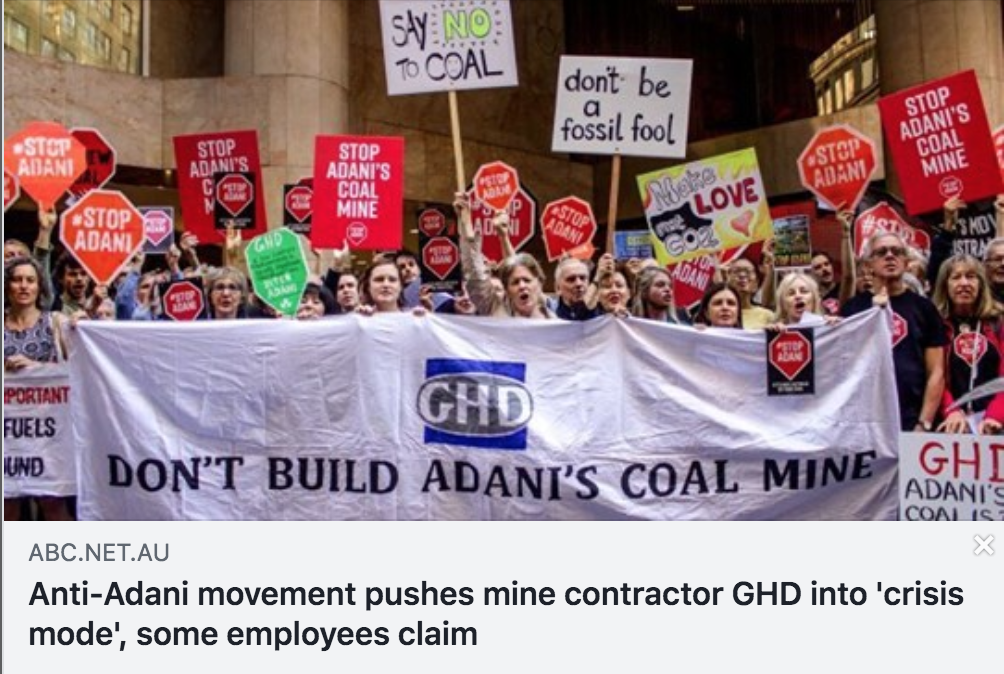 The year of the contractor campaign saw a movement of engineering staff speaking up about their employers involvement with Adani. The Carmichael mine is so unpopular that staff of Adani’s longest serving contractor GHD felt compelled to voice their opposition.

After a huge community campaign, 80,000+ emails and phone calls and over 150 protests, Adani’s longest serving contractor GHD stopped working with on Adani’s Carmichael mine after a decade of work on the project. This is a huge win for our climate, for Qld's water, for GHD's business and staff, and for the mighty #StopAdani grassroots movement! By the end of the year 62 major companies had said No to working on Adani's climate-cooking coal mine! 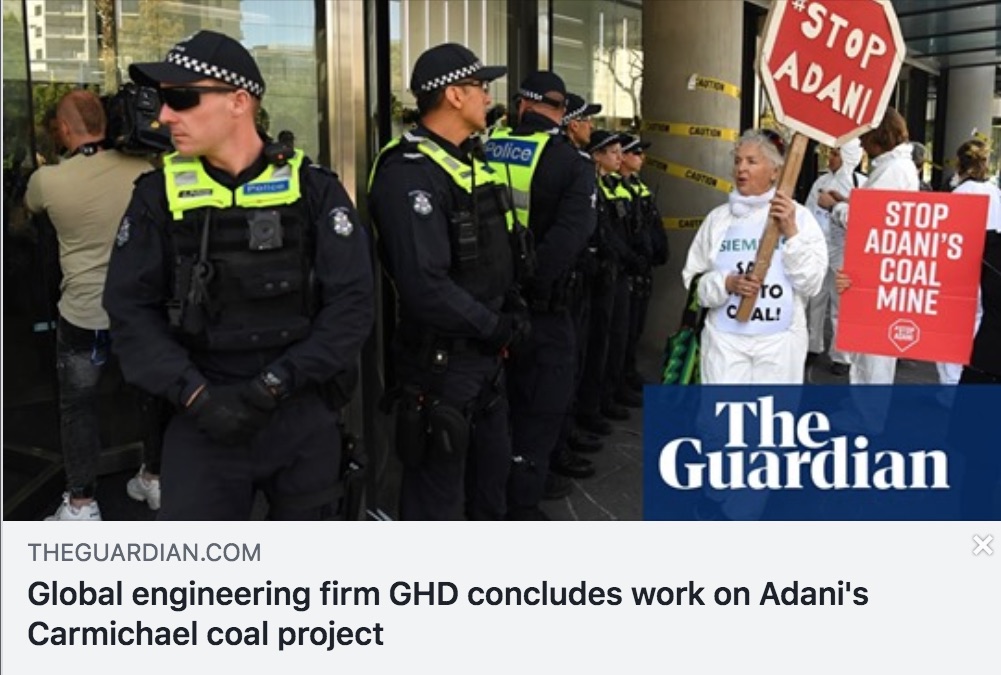