Hundreds joined #StopAdani rallies across the country and around the globe today, calling on the State Bank of India to rule out an almost $1billion loan to Adani for the controversial Carmichael coal project in Queensland.

Indian media has reported that the state owned bank is close to finalising the $1billion loan, prompting a rapid response from climate campaigners across the globe who have opposed the proposed coal project for over a decade. 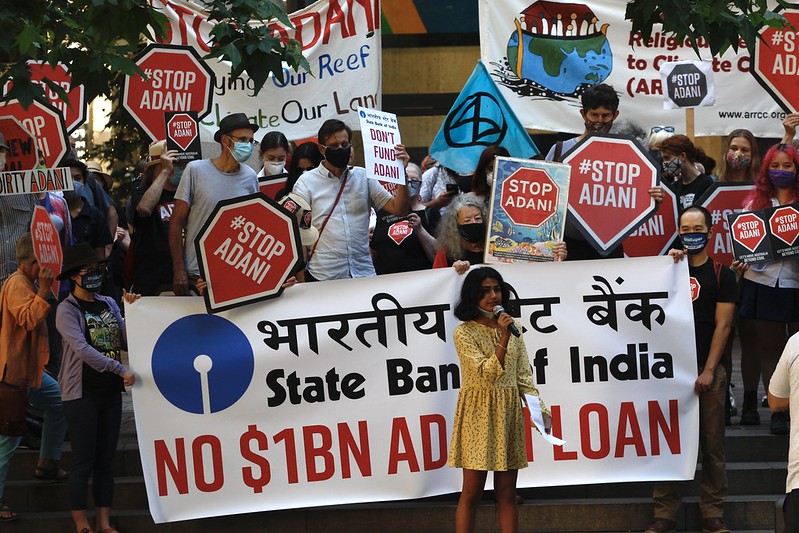 Rallies in Sydney and Melbourne were held at State Bank of India offices and at the Indian consulate in Brisbane and the Indian High Commission in Canberra. Campaigners delivered a letter from investor action group Market Forces, calling on the state owned bank to give assurances they will not use Indian taxpayers’ money to turbocharge global warming by supporting Adani’s coal project.

In Wellington, New Zealand campaigners hand delivered a letter to the Indian High Commission and met with a representative to urge the Indian government not to support the state owned banks loan to Adani’s coal mine.

In New York, USA  campaigners hand delivered a letter to the SBI office and met with the NYC State Bank of India Vice President to convey their concerns about the bank financing Adani’s coal project.

In Suva, Fijian campaigners hand delivered a letter to the Indian High Commission, calling on them to stop the State Bank of India loan to Adani’s coal mine, that will worsen climate impacts in the Pacific.

In London campaigners will deliver their message to State Bank of India offices on Friday morning London time, this evening Australian time.

As citizens rallied, youth climate strikers, climate action advocates and prominent Professor of economics and former leader of the Liberal Party John Hewson publicly called on the State Bank of India to stand for climate action not climate destruction and rule out finance for the contested coal project.

Varsha Yajman, former School Striker and law student who addressed the Sydney rally said, “As a first generation South-Asian Australian and school striker, I know what is at stake if the State Bank of India funds Adani’s climate-wrecking coal mine. It’s not just my future at risk, there are already millions of people impacted by climate disasters across India and Bangladesh. My family is from Bengaluru in South India, a place that used to be called the Garden City. That is not the case anymore. There has been a 60% decrease in rainfall over the past 10 years and the temperature has risen by almost 13% in the past 20. I worry about the impact of water crises and extreme heat on my family. As India battles the coronavirus pandemic, it is outrageous that public money should be given to a billionaire for a dangerous coal project. The State Bank needs to confirm that they are not involved in this loan.”

Dr John Hewson, former leader of the Liberal Party, former Director of Macquarie Bank and Professor in the Crawford School of Public Policy at ANU said, “Adani's Australian operations are already drowning in debt as financial institutions increasingly shun the toxic project which will have disastrous environmental impacts. Funding Adani's climate disaster would be an extremely risky move, the economics of the project simply don't stack up. Proper due diligence on this loan would reveal that any public loan to Adani’s coal project is an irresponsible idea. I recognise that State Bank may feel that they are operating in India’s national interest, but handing out public funds for Adani’s coal project would be risky given the urgent global need to reduce emissions, and especially for a project that is destined to become a stranded asset."

Claire Galvin, 19 year old from North Queensland said, "As a young Queenslander who's grown up in Cairns, I've watched the Great Barrier Reef suffer back-to-back mass coral bleaching events, caused by climate change. If Adani's coal mine goes ahead, it will lock in decades of carbon pollution and our Reef and the tourism jobs that rely on it will suffer. That's why I'm taking legal action along with other young people in Queensland to challenge Adani's national environmental law approval. The State Bank of India must rule out funding Adani's coal project. At a time when India wants to phase out imported coal, it's ridiculous to hand out public money to climate-wrecking coal mines.”

No bank in the world has directly funded Adani’s Carmichael coal mine and rail due to the controversy and reputational risk associated with the project. A $1 billion loan from the State Bank of India could provide the money Adani needs to dig the coal mine and build the rail line to open up the Galilee Basin. Controversy surrounded a proposed loan from State Bank of India to Adani’s Carmichael project in 2015, which the bank then walked away from after pressure from social movements in India and Australia.

89 companies have now committed to not supporting Adani’s coal project, including some of the world's largest banks and insurers. The State Bank of India is now at risk of using public funds to finance a project the private sector has shunned, with Indian taxpayers footing the bill.

The Australian Centre for International Justice, Justice For Myanmar and Stop Adani cautiously welcome Adani Ports’ plans to divest from their Myanmar container port business, which is a testament to...
See More