When a by-election was called for the Melbourne seat of Batman, our campaign seized the opportunity to put #StopAdani front and centre of this tight Labor/Greens electoral contest.

Our objective in Batman was to push Labor to commit to stopping Adani. Join us!

In just four weeks, hundreds of volunteers came together to call hundreds of people, knock on thousands of doors, put up hundreds of yard-signs, turn out at booths, and make stopping Adani front and centre of countless community gatherings.

As our campaign got stronger, so did Ged Kearney and Bill Shorten’s position on Adani:

Bill Shorten was right when he said you can’t have a bet each way on climate change.  There are no two ways about it - he must commit the Labor party to stop Adani. 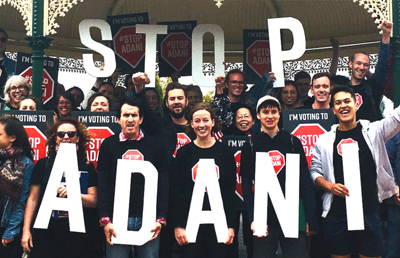 The results in Batman put the Coalition on notice too. Our movement has shown we are building our power. When we get organised, we can and we will put the #StopAdani message front and centre at the next federal election.

Without our movement made up of people like you, the focus on Adani in Batman would not have been possible. To all of our amazing community who called Shorten’s office, knocked on doors, had conversations with voters or put up yard signs, thank you.

Together, we have taken us one step closer to stopping Adani for good.

Join our people-powered campaign to #StopAdani!